We all come in contact with math in numerous situations. Whenever we see a math expression like $8 + 14 * 6$, we are looking at infix notation. In-fix means that the operators (like $+$ or $*$) are written between its two operands (the numbers the operation works with). However, there are two other notations that we will explore next.

As we touched upon in the Introduction, we should all be very much acquainted with in-fix notation.

One note is that exponents are marked with a $\uparrow$ rather than a ^ mark. Also, pre-fix and post-fix both do not use parentheses.

Evaluating Expressions in Any Notation

When it comes to evaluating in-fix expressions, you would simply follow PEMDAS: parentheses, exponents, multiplication, division, addition, and then subtraction. Multiplication and division have the same precedence, as do addition and subtraction; terms with equal precedence are evaluated from left to right.

With pre-fix and post-fix, there is no specific order of precedence.

Notice that the order that the operands are written in still matters, especially for division and subtraction! After all, for example, $6 - 2$ is very different from $2 - 6$.

As for post-fix, a similar idea applies except that you would scan the expression for any operators that are preceded by 2 operands. Here's an example:

There are two ways you could convert between in-fix, pre-fix, and post-fix notation. Both are listed down below.

Experiment with both so that you can see which one you prefer more; perhaps you may even use both!

Whenever you need to convert in-fix to one of the other two expressions, you can first list out all of the operands. Then, following the order of operations, slowly add in all of the operators either before (for pre-fix) or after (for post-fix) the operands they correspond to. The expression $X = (AB - C/D)\uparrow E$ will be used as an example.

Notes will not be written for the steps below as they are identical to the steps taken above for pre-fix; the only difference is that the operators are placed after the operands.

On the other hand, if you were to be converting from pre-fix or post-fix to in-fix, then you could make multiple scans from left to right to convert expressions into in-fix notation. Parentheses will be helpful for differentiating what you have and have not yet converted. Let's convert the pre-fix expression from before, $ = X \uparrow - * A \; B \; / \; C \; D \; E$, to better demonstrate what I mean.

Binary trees are a way to represent an expression more visually. For example, if I were to represent $3+6$ as a tree, I would draw: 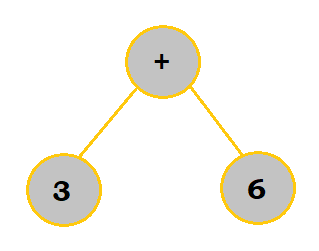 Note how the operator lies in the middle of the two operands and acts as a stem, or root. This applies to even pre-fix and post-fix expressions.

Let's look at $X = (AB - C/D)\uparrow E$ once more and convert it into a tree. Follow the table below to see the process.

Now, with this completed tree, we can convert to any notation we want. The order to write the expression is already drawn out; first, work with the operation in the bottommost row on the left (which is $A*B$ in this case). Complete any other operations in the same row, and then move up to the next row up. In this next row, start calculating from left to right again before moving up once more. This process is continued until you get to the uppermost (or final) operation.

Another way to think about converting from a tree to an expression is as follows:

If you visit a node's child, and that child has its own child or children, then you would need to analyze that/those 'smaller' child/children first It's quite winding, but hopefully the example below might make some sense.

So for example, let's look back at our tree above and try creating its in-fix representation. We'll start at the root, or the $=$ node.

As a recap, the only difference between the notations is where you place the operators. In the binary tree, you may see:

A quick note: for terms that have more than 1 digit, such as 16, parentheses have been put around them to avoid confusion.

For conversion problems, solutions using both the multiple scans and binary tree methods have been provided.

(If you didn't know already, you can click on the pictures to see an enlarged view if needed.)

Notice that in a few of the steps, I chose to work on subbranches of the final tree before putting them altogether.

Now, at this point, we just need to analyze the tree to get us the post-fix expression we want.

First, we will convert the post-fix expression to in-fix:

Then, we will convert this into pre-fix:

Then, we can analyze this tree from bottom to top, left to right to get our pre-fix expression: