Data structures are an integral part of efficient algorithms. When you have a large amount of data to work with, data structures help you keep organized and manage everything properly; knowing the right data structure to use will ensure you don't waste resources when running your program.

ACSL specifically focuses on stacks, queues, binary search trees, and priority queues. The general idea behind each is covered but not the actual details regarding how to implement them in programs.

For programming, there is a much more useful section on data structures (to come).

Stacks work in a "last in, first out" (LIFO) order. They support two operations, PUSH and POP. PUSH takes in a key, which is essentially a parameter, to insert at the top of the stack. So, PUSH("A") would add the key "A" to the top of the stack. POP is a bit different, as it is written as X = POP(). What this does is that it removes the top element in the stack and stores it in variable X. So, if there was a stack with its top element being "E", then writing H = POP() would store "E" in H.

In the case that the POP operation is called on an empty stack, then the variable is given the special value NIL (Not In List), which means "nonexistent".

Queues, on the other hand, are often used to handle requests. It's similar to waiting in line (or a queue); the first people in line are processed first. Hence, queues follow a "first in, first out" (FIFO) order.

The PUSH operation works the same as it would with stacks (the element is added to the top of the data structure). However, with POP, instead of removing the top (most recently added) element, queues have their bottom element removed.

A tip to handle both queue and stack related problems is to keep a list of all the elements, with the pushed elements being added to the top of the list. In a queue, cross off the bottom element, and in a stack cross off the top element. 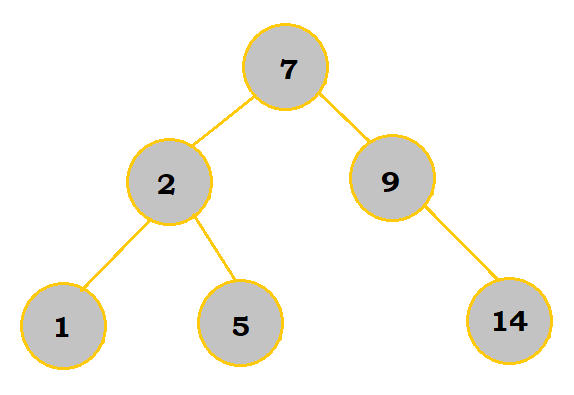 Binary search trees are one way to store items in a particular order. They can efficiently insert, delete, and look for items within the tree.

Each node can have a total of two children. The left child must be less than or equal in value, whereas the right child must be greater in value. With numbers, this is easy enough; as for alphabet letters, they are considered to be "less than" another letter if they come earlier in the alphabet. So, for example, A < E.

Note that the order you insert the nodes does matter, so if you were to switch out the positions of the letters in AMERICAN to become something like MCEAANIR, the tree would look very different.

In the case that a node needs to be deleted, there are three cases you must consider: if the removed node has 0 children, 1 child, or 2 children. When there are no children, you can simply remove the node. When there is one child, move the child node and its children up to replace the parent node. When there are two children, move the left child and its children up to replace the parent node, and add on the right child and all of its children to the left child or its children, using the same comparison process as described above. Removing nodes generally involves some minor shifting because "less than or equal to" and "greater than" relationships between nodes still have to be considered for proper placement.

To search for a specific code, refer to the following pseudocode algorithm:

So, searching first starts at the root of the tree and works its way down, moving either left or right based on what character you are searching for and where it is positioned within the tree. As an example, I will once again use the AMERICAN tree and attempt to find E. 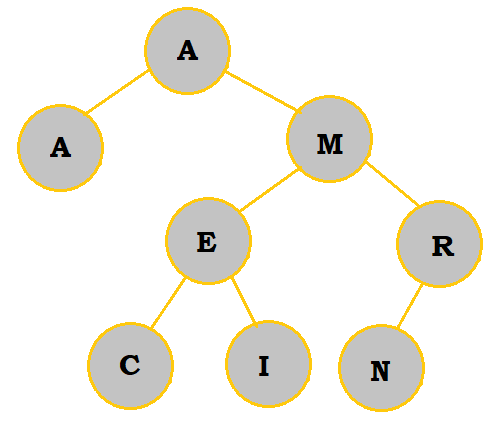 First, p is set to the root, A. x holds the value we are trying to find, E.

Then, we move on to the while loop, whose conditions have both been met. In this loop, since E > p's key, p is then set to equal M. The cycle then ends, and we start the loop anew. This time, E < p's key, so p is now set to equal E. Note that the while loop does not stop here! Instead, it would traverse through the loop once again and then execute the "else" statement to make found = TRUE.

So, by following this pseudocode, we have now successfully found our desired node.

We've worked with the AMERICAN binary search tree for quite a while, and now let's analyze it a bit more just for good measure.

If we were to compare the left and right branches of the root, we can see that the left branch has significantly less nodes to work with, thus making the tree very unbalanced. The more unbalanced a tree is, the longer it takes to search for a node.

While these two trees display the same elements, they are drastically different because of the order the elements were put into the tree. If we wanted to search for 7 and used the pseudocode mentioned earlier in "Searching for Nodes", it would take us 7 loop cycles using the unbalanced tree to find it. On the other hand, it would only take us 3 cycles with the balanced tree because there were less "layers" to the tree to work with; that is why balanced trees are much more efficient overall.

There is some leeway given to balanced trees; as long as the left and right branches of any particular node differ in the number of layers by no more than 1, then the tree is still considered balanced. See the image below: 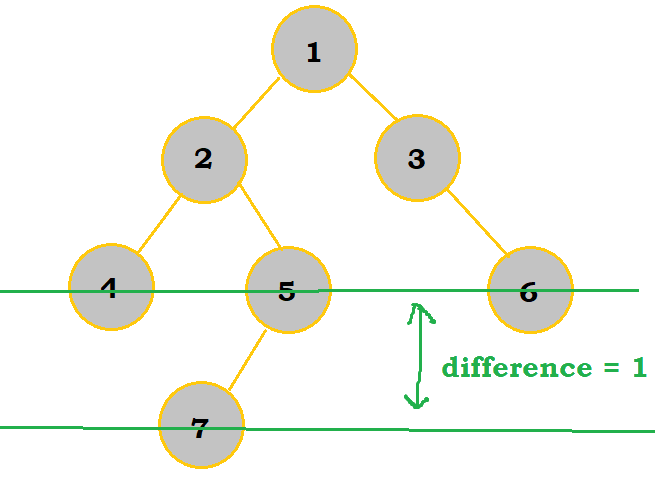 Although the tree leans more to the left subbranch, which has 4 elements compared to 2 in the right subbranch, this is still considered balanced as they only differ in 1 node layer overall.

A Full tree, or strictly binary tree, is drawn in a way such that each node (except the leaves) has 2 nodes; they are not necessarily balanced. For complete trees, each level besides the last level must be filled. For the last level, while it does not need to be completely filled, any nodes in that level are all located on the left side.

See the table below to understand the differences between the two in more detail:

Before moving further into priority queues, let's talk briefly about path lengths. In earlier sections, we addressed "layers"/"levels" of the tree; these can also be referred to as "depths". The root node has a depth of 0; the next layer has a depth of 1, and this continues to increment for subsequent, deeper layers.

Priority queues are similar to binary search trees. Essentially, elements that have the highest priority are served first, even if they may have been put into the queue much later. So, unlike binary search trees, inserting nodes may involve shifting other nodes to establish the priority order that we want.

As you add nodes, the tree is filled in from left to right, top to bottom; a level must be completely filled before moving onto the next one. Essentially, your heap must resemble a complete tree. When you add the node, you need to compare it with its parent. For min-heaps, if the new node is less than the parent, then you should switch the two and continue moving up the heap until the formation is valid. A similar idea applies to max-heaps except that it's for when the new node is greater than the parent. By doing so, all of the smallest elements (or largest for max-heap) would be at the top of the tree.

Take this table as an example on how to implement AMERICAN with a min-heap:

Just as a reminder, only the root can be deleted! To do so, replace the root with the rightmost node in the last node layer. Then, keep switching out the root with its smaller child (or larger child, if using max-heap) until the tree is finally valid. Make sure to make adjustions to the rest of the tree if needed.

1. Stacks/Queues: Determine what the value of C would be if the operations below were performed on an initially empty stack. Analyze it as a queue afterward.

As a stack… 18 would first be added to the stack; this would then be popped out and stored in B. Afterwards, 7 and 33 (in that order) are put into the stack. Because 33 was pushed into the stack later than 7, it is also the first to be popped; so, 33 is popped and stored into C, whereas 7 is stored in A. So, our final answer is 33.

2. Create a priority queue of the letters COMPUTING with a min-heap. What are the letters in the bottommost row, from left to right?

Follow the table below to see how the priority queue is constructed:

So, the bottommost letters are P and O.

Follow the table below to see how the binary search tree is constructed: